For the month of May, I’m introducing a few of my characters from Forgetting Jane, so you can get to know them a little of who they are and what they are made of.

Now I like to introduce you to…Elias, or Eli for short. 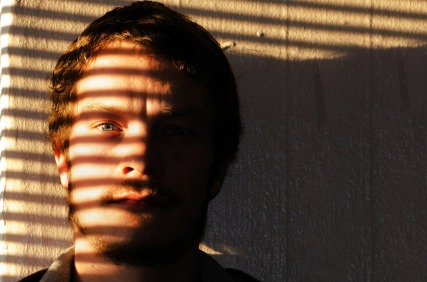 Take it away, Eli. Tell us about yourself.

I’m grew in the middle of nowhere Wisconsin and got the hell out of there the second I turned eighteen. I went into the military, which I can’t discuss what that entailed, but it was pretty f***ing gruesome. Saw too much, and had to get out.

I settled in Half Moon Bay, California for a little while and fell in love with the place. More shit went down and drank myself to near death. My only saving grace was the place I escaped from. My birth home.

Quit drinking and now I’m trying to stop smoking, which I can’t seem to fathom why I put myself through this crap. Next to drinking coffee from the Barn, it’s my only vise. I wonder what other shit I have to give up to be content in my life.

Marriage is a mix bag of nuts for me. Being tied down to one person is the last thing I ever want. I like my solitary life. So I’m not going to tell you much more.

Now, if you want to know more of me, buy FORGETTING JANE by CJ Warrant, and come check us out at: www.cjwarrant.com and join the Facebook party on June 29th, and win some fabulous prizes from all of the great authors.

There you have it!

As far back as I can remember, I’ve always been a visual person. I’ve learn and absorb greatly with images. Visuals helped me through high school and cosmetology. I learned along the way many people are the same.

So when my editor suggested that I would benefit in having a book trailer for Forgetting Jane, I thought it was a fabulous idea, but didn’t have a clue where to begin.

I watched many trailers on youtube, talked to many author friends–I even went on line to see how much it would cost me to have it made by someone else…Can I say HOLY COW!

As a debut author, my budget minded brain eked out in pain when I saw the cost. Therefore, I decided to tackle the trailer myself. I have a Mac, which included IMovie, and using that application was a breeze.

Within reach of my fingertips, I had all the tools I needed. So without hesitation, I dug deep into the right side of my brain and slammed it overdrive. I began piecing together images I’ve collected from various sites my fellow authors had suggested-some were free and some were paid for.

Once I got my picture collage together, I then broke them down to where they would best describe my novel. I have to say, as a novice, I did pretty damn good.

By the end of it, I got quite acquainted with my computer and learned a great deal more than just putting together pictures.

Don’t be afraid to make a trailer. Yes, it’s time consuming but in the end, it’s worth it and your budget brain won’t cry out in pain.

So without further ado…Let the trailer speak for itself.

Award-winning Mystery Author on books, reading and life: If proofreading is wrong, I don't wanna be right!

Whispers in the air

Life begins between the pages

Stories that keep you up all night

Travel the world in mystery novels

Stories and photos from Scotland

Visit http://reneamason.com for the latest info on Renea Mason